“When you think about your iPhone, it’s probably the product you use most in your life,” says a Senior Apple designer in their official iPhone 5 TV commerical launch.
Apple continues to capitalize on our society’s smart phone addiction by coming out with an upgraded iPhone every few months. We are obsessed with having the latest gadgets and afraid that if we don’t upgrade, we will be left behind with all the outdated, uncool iPhone “4ers.” The Apple commercial tells us that the “laws of physics are well, just guidelines.” Apple seems to be saying that by making their phone “bigger, yet smaller,” they have defied the laws of natures; their mobile device is somehow miraculous. What great advertising! Why? Because people keep buying them.
Did you know that Apple stores make more money per square foot than the retailer Tiffanys? (source: Jeopardy!)
Apple has found a way to tip the tech-life balance in their favor. I get separation anxiety from my phone the same way I do with if my dog isn’t around. I need to know its accessible at all times, but why do I feel so strongly about a square interface?

Has our addiction to smartphones gotten in the way of our quality of life, our personal relationships? Or has the iPhone enhanced them?

I’m not sure what’s stopping me from paying Pandora to get Ad-free listening. Maybe because I grew up in the era of free music entitlement when music piracy trumped artistic copyright. When I was in college, I could instantly download whatever song I wanted and dump it into my thousands of albums with little effort and no guilt. But when Napster got into trouble, we had to start paying. People got used to purchasing songs on iTunes. The web-savvy found other means of cheating the system, but these shortcuts are hard to tamper with if your a novice Internet user.

So as a music lover, I have turned to Pandora to accompany on my long-distance runs. I love being able to set up channels so I can listen to my favorite artist. I also like how Pandora likes to guess what else I liked based on my own musical preferences. My friend Joe uses Spotify, a similar service.

But why won’t I pay for ad-free listening? It really disrupts the mood when an annoying announcer comes on to talk to me about going back and earning an online degree from a no-name university. Or Target wants to get me in the “Makeup Mood” while I’m jogging serenely to The Shins. 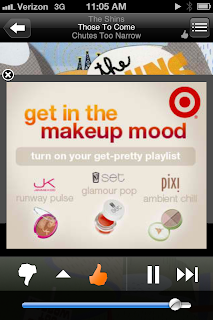 But I still subject myself to these ads day in and day out. Perhaps I have gotten used to the  interruptions. Or maybe because I am in the advertising business I subliminally want to listen to them. My boss tells me that it is part of my job to listen to TV commercials. I don’t really have a choice. When you are in the copywriting business, every ad, no matter what product or service in whatever medium, is relevant. A good copywriter is always paying attention to ads, even when they are in the middle of Torrey Pines running down a steep slope, jumping over tree branches. I may not buy your product, but I am always listening.

On the first day of class for Promotional Copywriting at UCSD’s Extension Program, my instructor made a statement that struck me as controversial. He said: “advertising isn’t art.” He explained that copywriters need to get used to the fact that our work will be judged, scrutinized, picked apart, and changed. A large part of the class is giving criticism and also being able to take it.

I think if you are a strong writer, you welcome as much feedback as you can on your work, whether it be positive or negative. Perhaps I have a bigger backbone because my master’s program is all about critiquing long bodies of mine and other students’ writing. But, just because copywriting can be critiqued and improved, doesn’t mean it isn’t art. After all, all art forms can be evaluated; if they couldn’t, a lot of art critiques would be out of a job. All writing, whether it be a book, a blog, a newspaper article, or a print ad, can be critiqued, just like film, paintings, and photography can be. What I find so interesting about art is its ability to mix the objective with the subjective.

I recently read a book called: “Everything That Rises: A Book of Convergences,” http://www.amazon.com/Everything-That-Rises-Book-Convergences/dp/193241634X and it compared different art forms and how they have influenced each other. I was surprised to see in the book next to a TIME’s magazine photo of the twin towers exploding a comparison of a foreign airline print advertisement. It was the same twin tower buildings, but they were shot from down below so the towers looked brave and powerful, not crumbling and disastrous.

So I’ve decided that if an art critique who dedicates an entire book to critiquing various art forms considers advertising art, than so can I. If we don’t treat our profession as art, than what does it become, just another job? Advertising copywriting is creative and sometimes more difficult than other types of writing because we have to get a message across quickly and effectively before our ADD audience moves on. We have to be precise, surprising, and witty – all in a matter of a few lines.

“Find Your” Own Headlines  People

I recently started writing TV commercials and have noticed that in the industry, most TV scripts have been replaced with scores. Music is speaking for the visuals now. So what is the role of the copywriter now in TV? Part of the commercial is conception and story-boarding, coming up with scenes that tell a story without words. Some commercials, like our most recent younger audience spot, is using actual text on the screen. “Your Passion” for example. We recently saw an Expedia commercial that inspired us. Each scene said “Find Your….” One was people attending a football game and the caption read, “Find Your Religion.” http://www.youtube.com/watch?v=eB490uu07S4

After seeing this, I am seeing this tagline everywhere. Corona is using it to promote their beer on print ads and billboards, “Find Your Beach.” 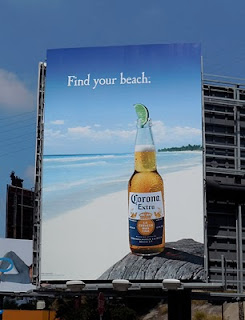 A cute little boutique in Little Italy writes in their eBlast “Find Your Style.”

Why does the advertising industry constantly steal and reinvent other company’s ideas? I can’t help but want to use this phrase as a copywriter, because it works on so many levels, but advertising should be unique and copy should be original.